Recently, an ad by local Edmonton hair salon Fluid, has caused a big stir.  Rightfully so, it's pretty effing gross, and clearly misogynist.  Read all about it here, and prepare to be sick to your stomach. 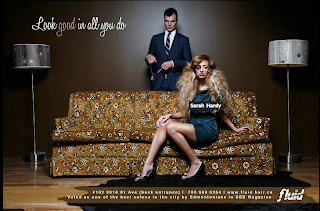 And here, just in case you didn't think it could possibly get any worse, a caption from the salon's photo shoot depicting the model pre-shoot, reads: "The hottest battered woman I've ever seen".

And here is another particularly special ad from their "Look Good in all You Do" campaign. 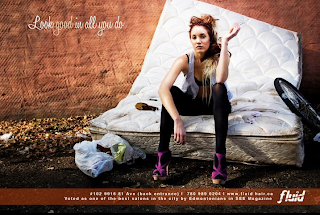 One hopes, the really, really special people behind this campaign get bitten in the ass by loss of business.  ﻿
Posted by mama T at 8:29 AM