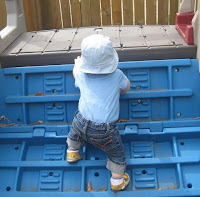 I hate that all of my son's life, people have taken his exuberance and infinite energy and speed as proof of his "boyness," though I take some solace in the fact that Girlio is fast showing signs of following right in his footsteps.  I hate that boys are still told not to cry, and even when parents aren't overtly that ignorant, boys are still encouraged to "shake it off" in ways that girls are not.  Anyhoo.

It breaks my heart to think that my rainbow, sparkles, flowers loving boy, who cries freely when sad or hurt, who loves a good cuddle more than anything will be coaxed or shamed away from these things because they are not "boy-ish" enough.

It breaks my heart equally to think that my baby girl, who is already now showing signs of being a rough and tumble, take-no-prisoners, world-here-I-come kinda kid; who already loves playing with trains and trucks and making "brmmm brrmmm brmmmm" sounds, will be directed and encouraged to love dolls and play house, and flowers and sparkles more than she loves sports and trucks and trains and active play.

But what I hate even more than thinking about these inevitabilities, is the fact that we don't even consider WHY this streamlining still happens.   And here's my take (which will probably piss some peeps off, but there ya go). We as a culture are uncomfortable with sensitive, non-sporty boys who like the colour pink because we as a culture are still hugely homophobic.  There.  I said it.

I know loads of cool parents who have no real problem with folks being gay who would die a thousand inner deaths watching their son wear pink, or drive in a toy Barbie car, or let them pick out a rainbow sparkle shirt from the store.  Call it what it is folks.  Homophobia.  Boys who like pink, who cry easily, who like "girl" things, who are sensitive, who don't like sports and would rather go to dance class, etc. etc. are sissies.  And we are scared of our boy being sissies because sissy = unmasculine = faggy.  Period.  There is no amount of spluttering or excuses that will change this icky reality.  We really need to get our shit together, because frankly, I expect more from our generation.  A whole lot more.  C'mon people.

And while we have slightly more cultural tolerance for girls who step outside of acceptable gendered play  and appearance boundaries,  like say girls who play sports traditionally played only by boys or who aren't comfortable with pink and frou frou, this is only acceptable for a brief period of time and to a certain degree.  We have a name for it - the tomboy phase.  The expectation is that eventually, all girls will embrace their 'girliness,' develop the dream of becoming a princess and marrying 'the one'.  You know, Prince Charming.   And when girls don't embrace girliness, flouff and frou frou evenutally, we get mighty uncomfortable.  And yes, you guessed it.  It's homophobia my friends.  No long hair?  No dresses?  No make-up.  Not all into giggling and weddings and boys?  That's dyke-y my friends, and we don't like it.

My quarrel here is not with girliness, or dreaming of being a princess, because as a femme-tastic queer grrrl, I'm here to tell ya, oh- I AM a princess.   I wish everyday could be a dress-up, put on the bling, going to a fabulous tea-party kind of day (though believe you-me... it ain't).  My problem is that the princess-ification of girl culture is more heterosexualization, that is, about landing Prince Charming and being taught to value the self for how it can attract others (yep, good old P.C. again) rather than the love of pretty sparkly things because those pretty sparkly things make you smile on the inside (and oh they DO make me smile on the inside :-)

Many people argue that gendered behaviour is innate, and there may be some (and I do emphasize SOME) truth to this.  Boy-o was drawn to typical boy things more than I ever thought he would be from an early age.  BUT - I believe very very strongly that the reason he is also drawn to things like rainbows, pink, flowers, sparkles, dancing, singing, snuggling and cooking in his wonderful second hand toy kitchen etc. is because he hasn't yet been told that these things aren't "for" boys.   A great example of this happened this past weekend.  We were at a picnic Pride event last weekend where there was a free tattoo booth for kiddos. Boy-o picked out a beautiful hibiscus flower, in shades of pink and orange with plenty 'o sparkles. He was so proud, showing it off to everyone and making movements with his arm to emphasize it, the way a newly engaged woman might self-consciously emphasize her bling hand. (It was a really nice tat - I got in line for one but then felt guilty about the kid waiting behind me - sigh).

My point here - and I do have one - is that given a choice, Boy-o chose a pink sparkly flower tattoo over lizards and turtles and frogs and all kinds of other options that might have been interpreted as more gender neutral (which is a term I find silly, but whatever).   Boys are steered to "boy" things.  They are discouraged from pinkness and sparkliness and feelings-ness and all the other things that girls are steered towards.   Girls are steered away from brrrm-brrrm Tonka trucks, from loudness and general ballsy-ness and towards all of the aforementioned "girly" things and ways of being.   This bit is clearly cultural, not innate.

Wanna know what I hate the absolute most?  The fact that I am plagued by the fear that people will accuse me of trying to "turn" my kids gay if I let my son wear pink sparkliness or tiaras or dresses, or if I encourage my daughter towards trucks and overalls and discourage Barbie and Disney princess world.  And at the risk of sounding like a broken record - yes, you guessed it, it's another example of ___________ (Fill in the blank).   I'll even give you a hint.

** but sorry, I just can't bring myself to post face pics of my kiddies on here because I think it's an invasion of what little privacy my big mouth affords them :-)