As I mentioned a few days ago, (with no small amount of excitement), I've had the opportunity to catch up with the fabulous Lesléa Newman for a Q & A prior to her Visiting Lecture in Human Rights here in Edmonton next Wednesday. Which, naturally, you have all *clearly* marked in your calendars.

Lesléa has penned over 60 books for children, youth and adults including Heather Has Two Mommies, The Boy Who Cried Fabulous, and I Remember: Hachiko Speaks.  Her most recently published book is October Mourning: A Song for Matthew Shepard (2012, Candlewick Press).

Lesléa has received a multitude of literary awards.  Many of her books have been Lambda Literary Awards finalists, and she has received Poetry Fellowships from the Massachusetts Artists Fellowship Foundation and the National Endowment for the Arts, the Highlights for Children Fiction Writing Award, the James Baldwin Award for Cultural Achievement, and three Pushcart Prize Nominations.  Lesléa was the Poet Laureate of Northampton, MA from 2008-2010 and currently serves as a faculty mentor at Spalding University's Brief Residency MFA in Writing program.

1. You've written more than 60 books, ranging in genre from kid's literature to young adult and adult fiction, as well as short fiction and poetry.  Are there kinds of writing you prefer to do, or feel more compelled to do?  And what factors into your decision-making process about how certain creative ideas fit best with a particular genre or form of writing?

LN: I'm happy whenever I'm writing, whatever the genre. I don't plan what I'm going to write: the content dictates the form. There are various advantages to the different forms. For example, when writing a novel, I know what I'm going to go back to day after day after day, which staves off the terror of the blank page that looms large when starting a new project. When writing a poem, if I'm very lucky, I can finish a first draft in a short period of time (sometimes even one day!) which is very satisfying. That said, my first love is definitely poetry, which I started writing when I was about 10 years old. I was lucky enough to apprentice with Allen Ginsberg and Anne Waldman when I was in my early twenties, so poetry is definitely what I'm most comfortable with, and what I turn to first. I've also become somewhat of a formalist. I find when I am writing about very emotional subjects, formal poetry is the best way to contain all those intense feelings.

2. What fuels you to write? Conversely, what gets in the way of writing?

LN: I am inspired to write by just about everything! Things I experience, things I hear about, things I dream about, current events, etc. And since I make my living as a writer, I find a dwindling bank account very inspiring. What gets in the way is lack of time. It's one of the ironies of being a writer: the more successful one is, the more in demand one is. And that demand can be very time-consuming and distracting. However, it's a very nice problem to have. 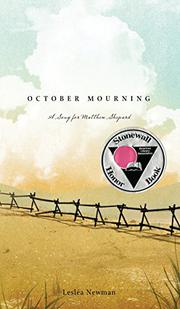 3. How did your most recent book, October Mourning, a young adult novel about the hate-infused murder of Matthew Shepard, come into being, particularly so many years after the fact?

LN: On October 12, 2009, I attended a production of The Laramie Project, Part II--The Epilogue, which was performed that night in about 150 cities in the USA and the world. I had seen the first part many years ago and remembered how powerful it was. The second part was even more powerful and after seeing it, I couldn't sleep. I got out of bed and wrote one of the poems in the book, called "Wounded." At this time, I was the poet laureate of Northampton, Massachusetts and I was spearheading a project called "30 Poems in 30 Days." I signed up about 75 poets to write a poem a day during the month of November and ask their friends and colleagues to pledge a monetary amount per poem (kind of like a walkathon, only a "poem-a-thon"). We raised about $13,000 and donated it to a local literacy group. My 30 Poems in 30 Days project became October Mourning. Once I started writing the poems, I couldn't stop. They literally poured out of me, one after another.

4.You spoke in a past interview, quite poignantly, about how we are defined by our experiences and our ability to remember and tell stories about them.  How did/does the experience of being so connected to the Matthew Shepard story, and the writing of October Mourning come to impact or define you?

LN: Bringing that book into the world comes with a responsibility to speak out against hate crimes and to do what I can to make the world a better place. The book has brought me to dozens of schools where I get to talk to young people about the kind of world we want to live in. I remain hopeful that our youth will change the world for the better. Telling the story of Matthew Shepard's murder over and over again reminds me on a daily basis how broken our world is and how important it is to work for social justice.

5.Can you tell me more about your writer-mentoring work, what it means to you, and how this project came into being?

LN: About 10 years ago, people began to approach me and ask if I would mentor them. It seems a natural progression in my career. So many people have been so kind to me, and I feel like it is important to give back. I have worked with many fine writers who have gone on to publication, and this is very gratifying.

6. What projects do you have on the go currently?

LN: Currently I am finishing up a picture book called Here is the World: A Year of Jewish Holidays which will be out in the next year or so. I've also completed a picture book called Ketzel The Cat Who Composed which is based on the true story of a cat who won an honorable mention in a piano composition contest. The illustrator is working on the art work as we speak. And Heather Has Two Mommies, which unfortunately has been out of print for a while, will be back with new illustrations. I'm very excited about that. And I am always working on poems in hopes of putting together another collection.

7. I recently saw your book Heather Has Two Mommies (the groundbreaking 1989 children's book) referred to as "a banned book legend." Were you surprised by the incredibly heated response to this picture book? What has been the experience of authoring a book that was simultaneously so celebrated by the queer community and so resisted by some other communities?

LN: Because it was so difficult to get the book published (a friend and I wound up publishing the book ourselves and it was funded by a large number of small donations) I didn't think anyone would really care that much about it. But of course, I was wrong. The book was both celebrated and protested all across the country. I was very surprised by the strong reaction; I was very naive. I am proud that my book sparked a nation-wide dialogue about families with same-sex parents. Most of all, I am happy that the book meant so much to so many children. Since the book was first published 24 years ago, many of the children who read it when they were growing up are now young adults. I often speak on college campuses and I have had many college students come up to me and say, "I read Heather Has Two Mommies when I was little and it was my favorite book." That thrills me. With all the strong reactions to Heather, it's easy to forget that the book's primary audience is children, not adults. The book was written so that children with two moms could see themselves reflected in a piece of literature and find comfort in that. I am happy that the book seems to have done its job.

8. Your upcoming Visiting Lecture in Human Rights at the University of Alberta is titled "It Takes a Village to Raise an Activist."  Without asking you to give too much away, is there anything that you'd like to tell folks about this lecture?

Please check out Lesléa's website for more information and a complete bibliography of amazing books to check out, as well as interviews, more information on mentoring, and other fun stuff.
http://lesleanewman.com/

The upcoming Visiting Lecture in Human Rights will be taking place Wednesday, March 27 at 7:30 pm at the Centennial Centre for Interdisciplinary Science, U of A, Room 1- 430  For more details: globaled.ualberta.ca/humanrights


See you all there!