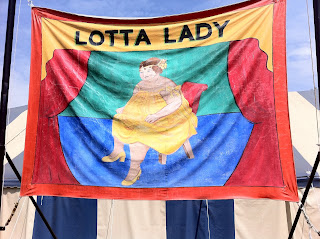 I went to visit Fort Edmonton Park (heretofore referred to as FEP for brevity!) with some friends and our kiddos yesterday, I will shamefacedly admit, for the very first time.  It`s a great place for kidlets, and as it turns out, a kinda fun hang-out for me too.  In addition to having a ridiculous amount of fun riding the carousel with the tots (what is it about carousels that transports you immediately back to childhood, I wonder?), I also greatly enjoyed checking out banners up representing an old-fashioned circus-act freak show.  As soon as I saw the freak show signs, I felt this nerdy little rush - they sort of transported back in time to thesis-land, in which I spent an inordinate amount of time studying public representations of otherness (in my case, the fat female body, but the hairy female body, and the gender 'deviant' body also fit well into similar frames of analysis).   I think the transportation back in time, if that's what I'm going to call it, stems from the fact that I was quite influenced by an  essay about 'freak show fat lady' Katie Dierlan, called: "'She's so fat': Facing the Fat Lady at Coney Island's Sideshows by the Sea" in which  Sharon Mazur talks about the ways in which Dierlan, through the use of using her fatness as performance, and through monologue, both reifies and strains vigourously against stereotypes about femininity and fatness.  Mazur argues that this is ultimately achieved by making her audience feel uncomfortable, and in so doing, forcing them to think about, and potentially reassess what it is they think they know about fatness.  I won't get into to the nitty-gritty of all the theories of why that is, because the only person that would excite is me. 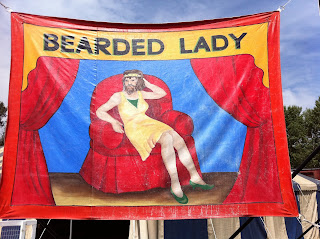 Suffice it to say, the freak show posters got me thinking.  And I wondered if the posters at FEP could be transgressive like Dierlan's freak show act - after all, they just sit there as static depictions of 'abnormality', while Dierlan's act is a living, breathing being, interacting with and purposefully challenging an audience.  Do these banners have the potential to challenge people's preconceived ideas about fatness and gender norms, or do they just make folks breathe a sigh of relief that they aren't that bearded lady, that fat woman, that questionably gendered person?  I'm not really sure.  What I do know, at the risk of sounding even more of a geek-buster than usual, is that I made my friend take a picture of me underneath the Lotta Lady poster, which I adore (because 1. really, folks, who doesn't want more lady?!, and 2. in many, many ways, I'm a whole lotta girl too).  And I'm also aware that I got a funny look or two while doing it.  (As in, why is that crazy chick holding her arms up in the air, pointing and grinning like a fool underneath that poster of that fat lady?).  I wonder if other folks even stop to take notice of the freak show acts at all.  What I do know is that they made me feel immediately comfortable.  At home. 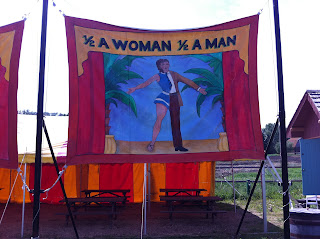 Whether other folks recognize themselves in the sideshow acts or not, those freaks, those are my people..
Posted by mama T at 8:47 AM